The 9 Intelligences: A Wholistic Approach to Curriculum Creation 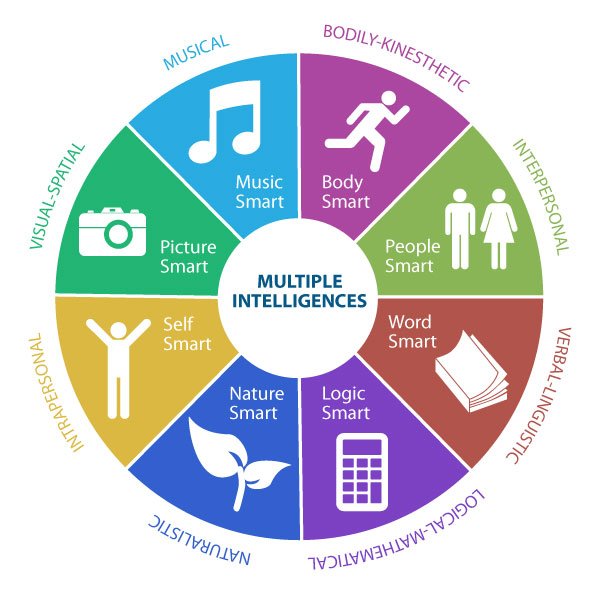 If you’re a parent, teacher, or anyone who’s interested in creating a truly comprehensive learning curriculum, then the knowledge of these 9 intelligences will be a great asset to you.

On January 27th, 2022, David Andrews, who’s an educator with 25 years of teaching experience, was the guest of an Education Think Tank session run by Life Force Canada.

David’s presentation was on 4 learning modalities, and Howard Gardner’s multiple intelligence theory was the second one he presented.

Enter Howard Gardner, a developmental psychologist. He was not satisfied with the notion of IQ, which only measured 2 intelligences.

His 1983 book, Frames of Mind: The Theory of Multiple Intelligences, set the stage for the exploration of multiple intelligences.

The final two intelligences, which were proposed later, are:

Let’s look at an overview of each of these:

Explaining musical intelligence, David said, “You pick up a song, you pick up an instrument, you can run with it.”

People who have a high degree of musical intelligence tend to be very…musical. They have an inherent understanding of tone, pitch, rhythm, and volume. They can also display a refined discernment between musical notes and different octaves.

For this intelligence, David said, “You know, some of you have a wife or a husband that can just pack that trunk when you’re going on vacation, and you’re amazed at what they can get in that trunk…”

He went on to say that, “…and some people just have this natural spatial ability to take things apart and put things together, and you know some mechanics can just pick the engine up in their mind and they can see all the parts and pistons and pieces, you know…moving, and that’s a visual spatial intelligence.”

This, along with logical-mathematical, is one of the intelligences that were evaluated by some of the first IQ tests, and it is still dominant today.

Linguistic-verbal intelligence can encompass many attributes, such as reading, writing, verbal communication, and understanding of syntax and grammar.

(Personally, I wonder if a high level of this intelligence includes the ability to learn multiple languages.)

This is the second of two types of intelligence that Western education systems tend to value highly.

The bodily-kinesthetic intelligence has to do with one’s awareness of one’s body.

Athletes and dancers are particularly high in this intelligence.

If you’ve ever seen a gymnast, ballerina, or Cirque du Soleil performer work their magic, you know you’ve seen someone who has developed their bodily intelligence to such a level that they can move with a grace that almost defies physics.

That’s a display of kinesthetic intelligence.

Additionally, I’d surmise that people who “learn by doing” might also be high in this intelligence. If you know children who are “hands-on,” and like to do things (rather than just talk about things or look at a drawing), you may want to take them into consideration.

You’ve probably heard it said that someone is “a people person,” or “is very sociable,” and “gets along well with others.”

If so, that someone is probably high in interpersonal intelligence.

This intelligence is about how adept one is in determining the emotions, thoughts, and feelings of others, as well as communicating with them (both verbally and non-verbally).

This has to do with the question, “What’s going on inside of me?”

People high in this intelligence tend to be very conscious of their present-moment state, or emotions.

If such a person is adequately skilled, they may be able to calm themselves down and even change their emotional state.

“He would be pulling these lobster traps up and he would look at the lobster and he would put it in a pile…look at this one and he’d throw it back in, and every now and then he’d throw another one back in. I’m like, Why is he doing that? That’s a nice big healthy lobster. Why would he throw that back in the water?

“So finally, I said, ‘Okay, all right, why do you throw that one back?’

“He says, ‘Well sonny, that’s a female, and if i don’t throw that one back in, I’m not gonna have any lobster next year.’”

Naturalistic intelligence is about being in harmony with nature.

In fact, David said that, “…in a sense, it’s our first intelligence. You know, we had to learn how to fish, to farm and to hunt to feed ourselves and take care of ourselves.”

This has to do with the big existential questions.

Those who would measure high in existential intelligence may dive into the question, What’s the purpose of Creation?

Each Child Is Unique

Because each child is unique, each child also has their own unique expression of these intelligences.

By that, I mean what David later told me: “My experience has been that everyone has a unique intelligence profile, and that’s what’s fascinating.”

That is, each child may naturally excel in a number of these 9, and they may feel that they have to work on the others.

With that in mind, we should keep in mind that intelligence and talent aren’t necessarily static concepts. That is, just because someone’s “bad” at math doesn’t mean that they’re bad at math their entire life.

Instead, you can teach your child to embody the growth mindset, and encourage them to work toward growing their talent in a particular area.

Creating a Curriculum That Develops All 9 Intelligences

On the face of it, it may seem simple to develop a curriculum that develops all 9 intelligences.

However, it might be challenging to do, so here are some suggestions:

You may not have heard of Nobel Prize winner Roger Sperry (or perhaps you forgot about him). Regardless, you’ve probably heard of something he pioneered: the notion that the different hemispheres of the brain each have different functions.

Stephanie Alverez of Roots and Wings, who was a guest on another one of our Think Tank sessions, mentioned something important about how the hemispheres of the brain develop.

She cautioned against pushing left-brained, logic-oriented learning too early in a child’s development (say, before the age of 7):

“I always share an article that talks about right brain and left brain development. And what it says [is] that, you know,  up to seven years old, the right side, which is your creative brain, is developing, and so if you were to force the child to do anything logical before…while their right brain is still developing, you actually stop the right brain from developing. You stunt its growth and its capacity for the rest of their adult years in order to ‘get ahead’.”

I’m almost certain that I heard another one of our guests–Simon Wolfson of Evergreen Learning Academy–relay the same sentiment.

So, be cautious of forcing left-brained, logic-oriented learning on your child before they’re ready. A possible indication of this readiness is that a child might be eager or willing to take on left-brained learning.

(Of course, I don’t think this means you should totally avoid all left- or logic-oriented learning–that might be practically impossible. I think the caution is to avoid pushing such learning on children, especially if they show resistance or are clearly not ready.)

If you want to create the best curriculum possible, Howard Gardner’s 9 intelligences will be most beneficial to you.

I hope you’ve found this article to be fairly comprehensive, and that you were able to watch David Andrews’ presentation on Gardner’s 9 intelligences. I believe that if you apply the insights you’ve learned, you stand a very good chance of creating an excellent curriculum that fully develops all 9 of your child’s intelligences.

Featured Image Info. At the top of this post is an image of an 8-piece circle, representing 8 of the 9 intelligences. The one not shown is existential intelligence. Attribution: https://commons.wikimedia.org/w/index.php?title=User:Sajaganesandip&action=edit&redlink=1